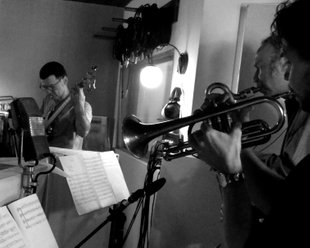 THE BAND AND THE MUSIC

ELEkTRO is a constellation coorporating acoustic music and live-electronica in terms of improvised jazz. In a PLAY with pulse and free tonality the musical memoirs and experience made by the band members throughout the years is beeing unfold, exchanged and weaved into new colourful patterns. Focus is rhytmical nerve, energy, great sensitivity and space and crafty melodys.

ELEkTRO was formed in 2006. In 2007 it began a most fruitful collaboration with world fame saxophonist John Tchicai. Several generations and completely different musical roots met in a melting pot of energy and new thinking in a row of concerts and on the album ELEkTRO feat John Tchicai (2011).

John passed away in October 2012 and the band toured in autumn 2012 with american saxophonist Ned Ferm.

Began at classical clarinet but shifted towards avantgarde and modern jazz in the nineties. His tone and play is at the same time both melodic and expressive and have made him highly demanded. Recorded with - amongst others: Kenny Wheeler, Lee Konitz, Aki Takase. In 2011 receiver of Südwestrundfunks Jazzpreis. World-wide touring.

Has a background in heavy metal and rock but plays as well experimental jazz. His energetic and unique sound and play made him in 2007 winner as best soloist in Young Nordic Jazz Comets with these words: ”He plays like a master”. Best known as guitarist in the power trio Bushman's Revenge.

World-famed saxophonist, composer and bandleader. One of the main figures in the New York free jazz movement in the 60's where he became a leading exponent of the jazz avant-garde and a father figure for the European avant-garde after that. Recorded with - among others - John Coltrane, Albert Ayler, Archie Shepp and John Lennon.

Graduated with diploma from The Carl Nielsen Academy of Music 2008. In 2007 titled 'Jazz-player of the year' in Fynen. Member of several national and international jazz-groups. Recorded with among others: Anders Mogensen (DK), Håvard Wiik (N), Philipp Gropper (D), Kresten Osgood (DK). From 2008 member of the famous Danish Radio Big Band.